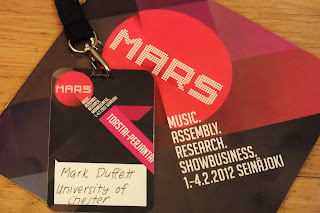 Following a kind invitation from organizers the Sibelius Academy, last week I attended the MARS 2012 conference as a keynote speaker.
MARS is an annual Finnish popular music event held at the Rytmikorjaamo (a large garage-turned-music venue) in Seinäjoki. It specializes in blending music industry concerns with academic speakers: past keynotes have included Mark Percival, Lee Marshall and Simon Frith. This year the Sibelius Academy invited alternative media expert Professor Chris Atton to talk about the history of music journalism. Chris is seen here with the award-winning Finnish braodcaster and dedicated music enthusiast Pekka Laine (on the right and left respectively): 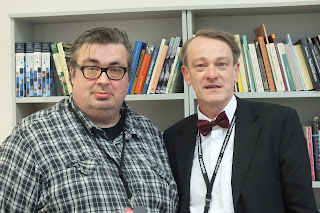 Maintaining the focus on issue of music audiences, the organizers also asked me to discuss popular music fandom in terms of its definition, mechanics and future... 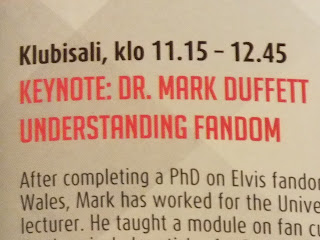 Beyond the two keynotes, a series of panels - presented in Finnish - explored various ‘popular musiikkikulttuuria’ topics, including how to attract younger audiences to festivals.
Finland has a very interesting popular music scene. A range of national bands like Lordi and Nightwish show that the country has had an especially strong heavy rock and metal tradition. Several local bands took to the stage on the first night of our conference including the fascinating Mr Peter Hayden - a Hawkwind-style instrumental outfit who fused prog rock, grunge and straight metal with a dash of new wave style bass.
Despite the predictable freezing weather it was a great trip. Apparently, Finland can have snow on the ground from as early as late October all the way through until May. When we were there, temperatures in Seinäjoki plummeted down to as low as -32 degrees centigrade: not good weather for hanging around outside. Even the locals were finding it extremely cold. 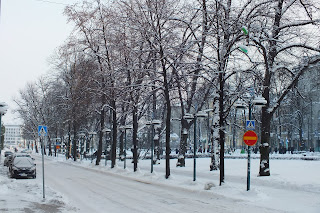 Meanwhile our hosts, Finnish music scholars Saijaleena Rantanen of the Sibelius Academy and Dr Heikki Uimonen from the University of Tampere (below left and right) were both extremely helpful and hospitable. 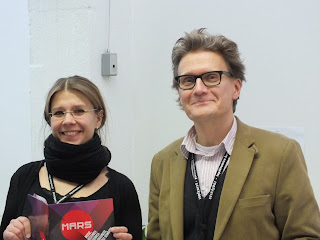 ... All I can say to you is thank you again for a wonderful trip, and in my best Finnish:
"Toivon, että tämä ihana tapahtuma jatkuu menestyä isompi ja suuremmassa mittakaavassa."
Posted by Dr M Duffett at 16:26